Robert Kennis, DVM, DACVD, MS, is a professor at Auburn University. He earned his DVM from and completed a residency at Michigan State University. Dr. Kennis earned his MS in veterinary immunology from Texas A&M University. He is past president of the American Academy of Veterinary Dermatology and has presented numerous continuing education seminars at the state, national, and international levels. Dr. Kennis has received the Pfizer Distinguished Teacher award at both Auburn University and Texas A&M University and the Texas A&M Association of Former Students’ Distinguished Achievement award. His research interests include food allergy, endocrine alopecia, and feline bacterial infections. 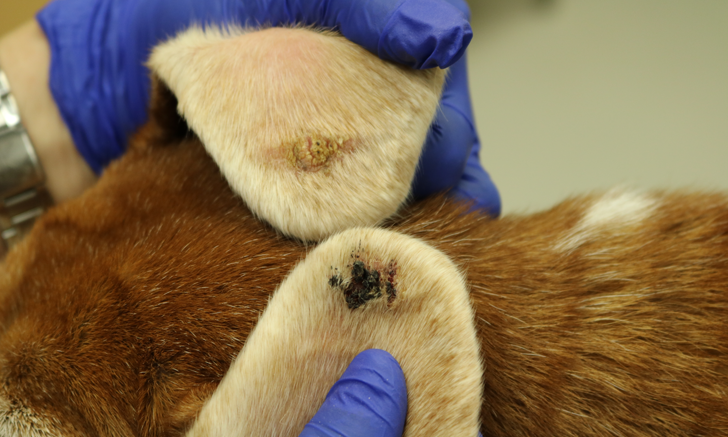 Pentoxifylline (10-30 mg/kg PO every 8 to 12 hours) has a reported elimination half-life of 24 to 404 minutes that supports 8-hour administration.4-6 In dogs, oral bioavailability is variable and reported to be 15% to 50%.5,6 Pentoxifylline is available as a 400-mg extended-release tablet and is commonly halved or quartered to achieve the intended dosage.5,6 No controlled studies have directly investigated the pharmacokinetic effects of breaking the extended-release tablet. Pentoxifylline is generally well-tolerated in dogs, and GI upset is the most commonly reported adverse effect.5,6 Anecdotal reported use in veterinary medicine is vast; however, peer-reviewed studies evaluating its efficacy for the treatment of specific diseases are limited and generally retrospective. Based on anecdotal evidence in human and veterinary medicine, there is believed to be a lag in onset to clinical effect that may last several months.6-8 Previously, concerns about cost limited the use of pentoxifylline in veterinary medicine, but affordable generic formulations are now available.

Following are 5 common uses of pentoxifylline in veterinary dermatology according to the authors.

Cutaneous vasculitis refers to inflammation of the blood vessels in the skin (Figure 1) that results in altered blood flow and ischemic necrosis of the skin (Figure 2).9 The condition may be idiopathic or caused by adverse drug reaction, infection, insect bite, or neoplasia.8 Treatment should address the underlying cause and repair tissue damage.9 Pentoxifylline is an ideal treatment (regardless of cause) because of its effect on perfusion and inflammation.

Because pentoxifylline has a potential delayed onset of effect, it is often combined with other drugs (eg, glucocorticoids).9 In a retrospective study,10 9 of 19 dogs with vasculitis were treated with pentoxifylline (10-20 mg/kg PO every 12 hours) alone (1 dog) or in combination (8 dogs) with prednisone (1.5-3 mg/kg/day) with variable success. Six dogs had complete resolution, 2 had partial resolution, and 1 failed to respond. Of the 6 dogs with complete resolution, 3 relapsed when prednisone was tapered, suggesting that pentoxifylline may be insufficient when used alone to treat vasculitis.10 Insufficient dosage and frequency could explain the limited success and lack of response in 3 dogs.10 Despite reports of variable success, pentoxifylline is often used for the treatment of vasculitis. 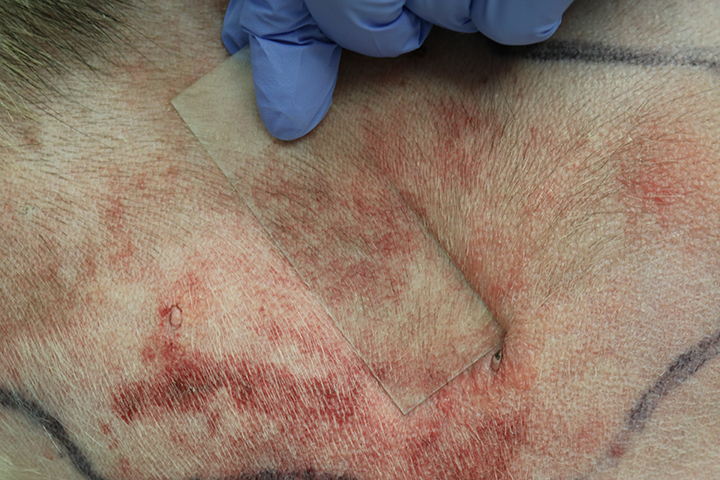 FIGURE 1 Multifocal to coalescing erythematous macules on the ventral abdomen of a dog with cutaneous vasculitis. Because the lesion does not blanch on diascopy, it is likely due to vasculitis or hemorrhage. Image courtesy of Amelia White, Auburn University

FIGURE 1 Multifocal to coalescing erythematous macules on the ventral abdomen of a dog with cutaneous vasculitis. Because the lesion does not blanch on diascopy, it is likely due to vasculitis or hemorrhage. Image courtesy of Amelia White, Auburn University

FIGURE 2 Full-thickness dermal necrosis on the hock of a patient with a neutrophilic necrotizing vasculitis suspected to be secondary to a spider bite. Pentoxifylline (25 mg/kg PO every 12 hours) and open wound management were provided. Image courtesy of Karly Hicks, Auburn University

FIGURE 2 Full-thickness dermal necrosis on the hock of a patient with a neutrophilic necrotizing vasculitis suspected to be secondary to a spider bite. Pentoxifylline (25 mg/kg PO every 12 hours) and open wound management were provided. Image courtesy of Karly Hicks, Auburn University

Canine familial dermatomyositis (CFD) is an inherited, ischemic disease of the skin, blood vessels, and muscle that predominantly affects Shetland sheepdogs and collies; however, other dog breeds can also be affected.11 Lesions occur in the first few months of life and can vary from minor alopecia (Figure 3) to severe dermal ulceration and muscle atrophy. CFD is incurable; many treatments have been attempted with limited success. In a study, 10 dogs with CFD had partial or complete resolution of cutaneous lesions after receiving pentoxifylline (25 mg/kg PO every 12 hours for 12 weeks).12 The median time to initial response was 6 weeks, supporting a lag in onset of effect.12 No adverse effects, including clinicopathologic abnormalities, were observed, further supporting the relative safety of pentoxifylline as compared with other therapeutic options.12 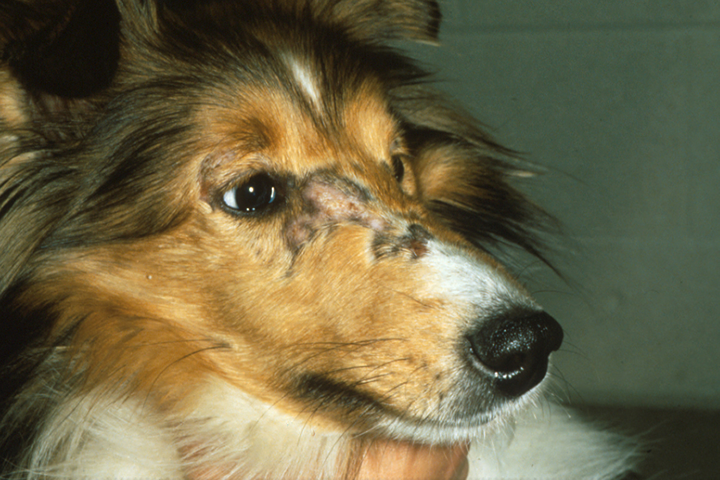 FIGURE 3 An alopecic, ischemic lesion on the bridge of the nose due to dermatomyositis

FIGURE 3 An alopecic, ischemic lesion on the bridge of the nose due to dermatomyositis 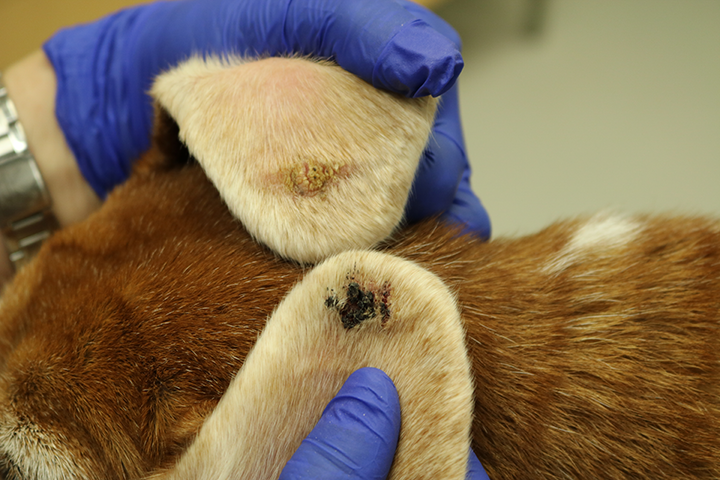 FIGURE 4 Bilaterally symmetric crusted lesions at the apex of the pinnae, consistent with pinnal vasculitis

FIGURE 4 Bilaterally symmetric crusted lesions at the apex of the pinnae, consistent with pinnal vasculitis

Allergic contact dermatitis (ACD) is a type IV hypersensitivity reaction.8,14 Reported causes of ACD in dogs include ingestion of plants, topical medications, detergents, cleansers, fibers, and plastic.8,14 Pentoxifylline inhibits tumor necrosis factor-α, which is a critical mediator of ACD.1,14 Pentoxifylline (10 mg/kg PO every 12 hours) was protective in preventing clinical signs in 3 dogs with known contact allergy to plants in the Commelinaceae family.14 A clinical effect was observed within 2 days of onset of therapy and persisted for 7 days following discontinuation of therapy.14 Treatment duration was limited to 3 to 5 weeks due to the cost of therapy.14 Pentoxifylline has become less cost-prohibitive; thus, it can be a reasonable choice for prevention of clinical signs of ACD when avoidance is not possible. Major limitations of this study were the few number of dogs included and its retrospective nature. Additional investigations are required to determine the effectiveness of pentoxifylline in the treatment of ACD.

Canine atopic dermatitis (CAD) is a common allergic dermatosis characterized by hypersensitivity to environmental allergens, primarily mediated by immunoglobulin E (IgE).15 CAD can be challenging for the patient, pet owner, and clinician despite available pharmacologic management options. Although pentoxifylline is not considered a mainstay for management of CAD, limited research suggests it may have value as adjunctive therapy.16,17 One study in normal dogs demonstrated that pentoxifylline inhibited late-phase inflammation by inhibiting IgE-mediated mast cell degranulation and eosinophil recruitment at the site’s wheal formation.18 These findings suggest pentoxifylline may have some effect in managing IgE-mediated inflammatory diseases. A double-blinded, placebo-controlled, crossover study of 10 atopic dogs showed that pentoxifylline (10 mg/kg PO every 12 hours) reduced pruritus scores by 50% in one-third of dogs over 4 weeks.16 Dexamethasone and pentoxifylline have an in vitro synergistic effect on cytokine production via human leukocytes.19 Pentoxifylline may have use as a steroid-sparing agent in dogs with CAD, but further studies are warranted to confirm its efficacy.15,16

In addition to these indications, anecdotal evidence suggests pentoxifylline may be useful for treatment of vesicular cutaneous lupus erythematosus, erythema multiforme, acral lick dermatitis, and metatarsal fistulae in German shepherd dogs.8 Recent evidence evaluating the use of pentoxifylline in the treatment of dermal arteritis of the nasal philtrum and symmetric lupoid onychodystrophy suggests this drug may be an effective sole or adjunctive treatment in the management of these diseases.20,21 Controlled clinical studies regarding the efficacy of pentoxifylline are lacking. Because of its relatively affordable cost and minimal adverse effects, pentoxifylline may be a useful adjunct therapeutic for dermatologic conditions in which improved microcirculation and reduced inflammation are desired.