Emily Davis, DVM, earned her DVM from Kansas State University, where she also completed a clinical pathology externship. She is working on a small animal rotating internship at University of Tennessee and plans to pursue a dermatology residency. Her interests are in cytology and veterinary dermatology.

Lisa M. Pohlman, DVM, MS, DACVP, is an associate professor of clinical pathology at Kansas State University. She earned her DVM from University of Guelph and her MS in clinical pathology from Auburn University, where she also completed a residency. Dr. Pohlman serves as the president and medical director of the Riley County Humane Society in Manhattan, Kansas, and is an active teacher and mentor of veterinary interns, residents, and graduate students. She enjoys providing CE in clinical pathology through speaking engagements, online courses, and publications. Her research interests include improvement of clinical pathology laboratory methods and identification and characterization of disease in domestic species, particularly in shelter animals, as well as pets owned by individuals who cannot afford routine veterinary care. 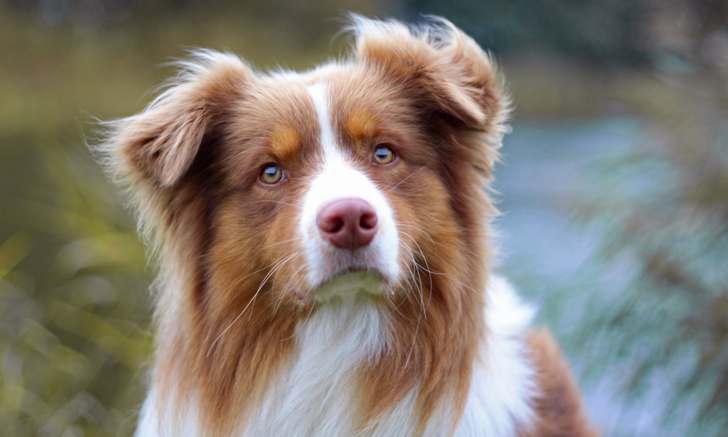 A 4-year-old, 32-lb (14.5-kg) neutered male Australian shepherd dog was missing for 4 days after running away while on a walk in a wooded area after hearing a gunshot. Once found, his owner brought him to the clinic.

On physical examination, the dog was bright, alert, and responsive. BCS was 2/5. Findings were within normal limits, except for an ≈3-inch by 2-inch lesion consistent with acute moist dermatitis on the right dorsal shoulder.

The lesion was clipped and cleaned with 2% chlorhexidine solution, and the owner was instructed to clean it twice daily until the lesion resolved.

Although systemic illness was not suspected, CBC and serum chemistry profile were performed. No significant abnormalities were identified on chemistry, but the in-clinic blood film review revealed an apparent degenerative left shift, which is defined as the occurrence of more young neutrophilic granulocytes (usually bands, but may include metamyelocytes and myelocytes) in circulation than mature (segmented) neutrophils. Neutropenia is common in patients with degenerative left shift, but the neutrophil concentration may be within the reference interval or, less commonly, the neutrophil concentration may be increased.1 As a result of these findings, an EDTA blood sample was submitted to a clinical pathologist for repeat CBC and blood film evaluation (Table 1). Morphologic assessment from the blood film revealed that all neutrophils and eosinophils on the smear had hyposegmented nuclei with mature, clumped chromatin (Figures 1-4). No evidence of toxic change was seen.

Pelger-Huët anomaly was diagnosed based on morphology of the granulocytes, in which the nuclei of all neutrophils and eosinophils on the blood smear exhibited hyposegmentation with characteristic mature chromatin. Absence of toxic change in the neutrophil line, consideration of the patient’s breed, and absence of apparent systemic illness supported the diagnosis.

Treatment is not required for Pelger-Huët anomaly.

The defining feature of Pelger-Huët anomaly is hyposegmentation of mature granulocytes. Nuclear shapes can be round, heart (Figure 1), oval (Figure 2), reniform (Figure 1), peanut (Figure 3), band (Figure 3), or bilobed; nuclei concurrently exhibit mature, coarse chromatin.2 Neutrophils from affected patients can be confused with immature forms (eg, band neutrophils, metamyelocytes, myelocytes), resulting in inappropriate interpretation of a left shift and confounding appropriate identification of the condition.3 Pelger-Huët neutrophils should be referred to as such and not misclassified as bands, metamyelocytes, or myelocytes, as these imply the presence of inflammation.1 Identification of hyposegmented eosinophils and basophils with clumped chromatin (Figure 4) can also help confirm suspicion of Pelger-Huët anomaly. No basophils were seen on the blood film in this case.

This mutation is an autosomal dominant trait with incomplete penetrance and has been demonstrated to be caused by the gene encoding the lamin-B receptor in humans and mice.2,3,7 In addition to granulocytes, megakaryocytes are also affected, suggesting that a stem cell defect can result in failure to lobulate.2

Heterozygous patients do not have any clinical signs of a disease process,3 making the heterozygous form of the Pelger-Huët anomaly an incidental finding during examination of a blood smear.2 The homozygous phenotype has not been reported in adult dogs, suggesting it is lethal in utero or these dogs die shortly after birth,3 similar to homozygous rabbits and cats, which have both been reported to exhibit skeletal deformities.8

The frequency of this condition is unknown in many veterinary species. One study demonstrated the Pelger-Huët anomaly has an incidence of 9.8% in Australian shepherd dogs, but these data may have a geographic bias (West Coast of the United States) and may be influenced by intensive inbreeding and line breeding.3 Further studies are required to assess the incidence of this anomaly in other dog breeds and veterinary species. 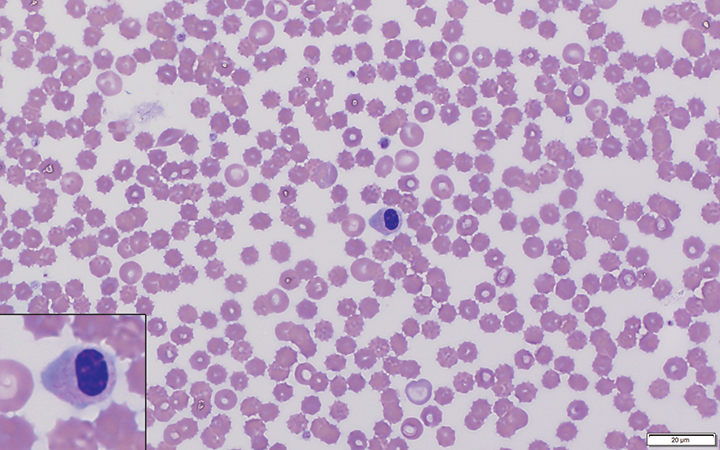 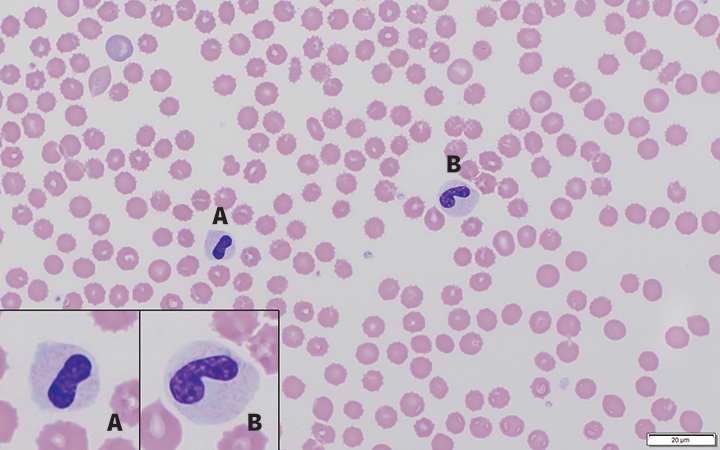 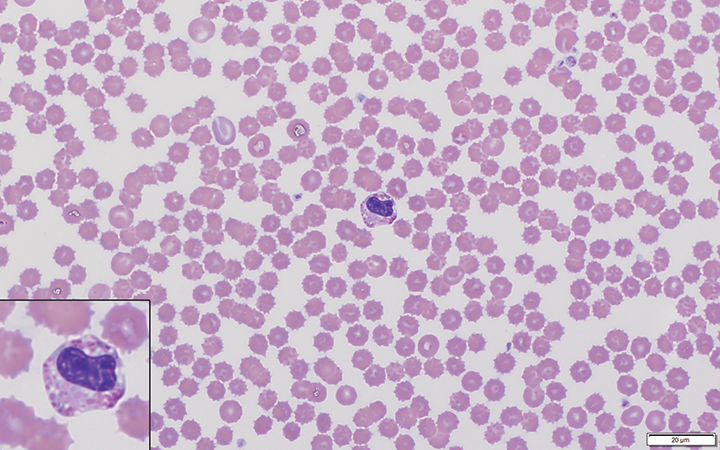 FIGURE 1 Feathered edge of a blood film from an Australian shepherd dog with inherited Pelger-Huët anomaly. Neutrophils have heart-shaped (inset A) and reniform-shaped (inset B) nuclei. Chromatin is mature and clumped in both cells. Modified Wright’s stain; 100× magnification

FIGURE 3 Blood film from an Australian shepherd dog with inherited Pelger-Huët anomaly. Neutrophils have peanut-shaped (inset A) and band-shaped (inset B) nuclei. Nuclear chromatin is mature and clumped in both cells. Modified Wright’s stain; 100× magnification

FIGURE 1 Feathered edge of a blood film from an Australian shepherd dog with inherited Pelger-Huët anomaly. Neutrophils have heart-shaped (inset A) and reniform-shaped (inset B) nuclei. Chromatin is mature and clumped in both cells. Modified Wright’s stain; 100× magnification

FIGURE 3 Blood film from an Australian shepherd dog with inherited Pelger-Huët anomaly. Neutrophils have peanut-shaped (inset A) and band-shaped (inset B) nuclei. Nuclear chromatin is mature and clumped in both cells. Modified Wright’s stain; 100× magnification

Inherited Pelger-Huët anomaly is benign, but it is important to differentiate this condition from a left shift associated with inflammatory disease to avoid unnecessary treatment, further diagnostic testing, and associated medical expenses.5 Inherited Pelger-Huët anomaly should also be differentiated from pseudo-Pelger–Huët anomaly, which is a transient, acquired condition identified in multiple species (including cattle, horses, dogs, cats, and humans). In pseudo-Pelger–Huët anomaly, neutrophils have similar morphologic features, reflecting asynchronous maturation, that arise secondary to infections, myelodysplastic syndromes, or drug treatments.1,2 In humans, pseudo-Pelger–Huët anomaly has been associated with administration of many drugs (eg, sulfadiazine/trimethoprim, immunosuppressive agents, ibuprofen).5 It has also been identified in patients with coronavirus disease of 2019 (ie, COVID 19).9

Differentiation can be made via blood smear evaluation of the morphologic features of nuclear lobes, nuclear size, and chromatin pattern.5 In healthy patients with inherited Pelger-Huët anomaly, the granulocyte chromatin is more clumped than with pseudo-Pelger–Huët anomaly and there is no evidence of toxic change present in the neutrophils. Moreover, in contrast to the inherited form, in which all granulocytes are typically affected to some degree, not all (and often a minority) of the neutrophils are typically affected in pseudo-Pelger–Huët anomaly cases.6,10-12

Listen as host Alyssa Watson, DVM, talks with the authors of your favorite Clinician’s Brief articles. Dig deeper and explore the conversations behind the content here.